No matter how hard I tried to fight off these fears I kept replaying these horrible scenarios in my head with varying levels of violence and all leading to certain death by drowning. Instead of being fun and excited Mum, I was terrified of dying Mum.

Taking the overnight ferry from Portsmouth to St Malo was going to be a big adventure. We would squash in to our bunk beds and have a midnight feast and tell funny stories before getting a solid 8 hour sleep in, and then arrive in France refreshed and excited. The two and a half hour drive to the campsite would be a breeze.

It did sort of go that way, for the Husband and the kids at least. After boarding the ferry at around 7pm we all had some pizza and the kids went wild in the (very small) soft play before we headed over to the bar. Entertainers had the kids dancing and singing as we drank cheap cocktails. Mojitos for £4 with actual rum in, and a double measure at that. I was most impressed. Who knew there was all of this fun to be had on board? Anyone who has done this before of course but it was all new to us.

By 10pm we went down to our cabin. And by going down I mean all the way down to deck number 1. It was lower than the garages. I immediately began to panic.

If the boat sprang a leak we would not stand a chance. So of course all I could think about was the variety of ways in which the boat might start sinking.

The way that I saw it there were three main things that could go wrong:

No matter how hard I tried to fight off these fears I kept replaying these horrible scenarios in my head with varying levels of violence and all leading to certain death by drowning. Instead of being fun and excited Mum, I was terrified of dying Mum. So I stayed quiet as Norm got the kids ready for bed. 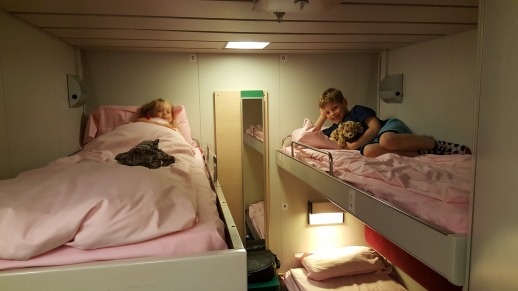 I recognised the warning signals that a panic attack was coming. I was lying in bed hyperventilating, so I did circular breathing, which helped. I thought about all of the people who work on the boat and how they do this every day. And I thought about the kids and how a panicking mother would ruin their excitement. I managed to control myself, just about but getting to sleep was another matter. Every time I drifted off I’d wake up and remember that we were basically lying on the floor of the boat and I’d stick my foot out to check that water had not begun its deadly ingress into our cabin.

Of course each time I did this the floor remained resolutely dry.

Once the kids were asleep I tried to wake the husband for some reassurance. His brand of tough love involving cold hard facts about how safe boats are, might have helped. But he was snoring and would not be easily woken. I left him alone and picked up my new Jack Reacher novel (by Lee Child). But when it got to the exciting bits where people were fighting and lives were in danger I started panicking again so I stopped that and persevered in my quest for sleep.

It was 4am the last time I checked my phone. At 6am the husband’s alarm went off. I assumed that was what it was when annoying music started playing too loudly in my ear. He thought it was too, until he picked his phone up and saw that it was resolutely silent. It was the boat’s morning wake up call. We had an hour before we would arrive. I smiled with relief and went and had a shower in what felt like the smallest bathroom in the world.

We were in France! (where we had an utterly amazing holiday and the kids ate snails. More of that later)

*According to former naval officer Hubbard (aka Boba, aka my step-dad), the location on deck 1 would be where least movement is felt and so would have been an optimum location for prevention of seasickness. As I would rather be sick than drown I’m asking for an above water line cabin next time.