“When you are stressed you start to breathe using shallow breaths and this leads to hyperventilation. When you hyperventilate your blood chemistry changes significantly and that has all sorts of effects,” said the GP 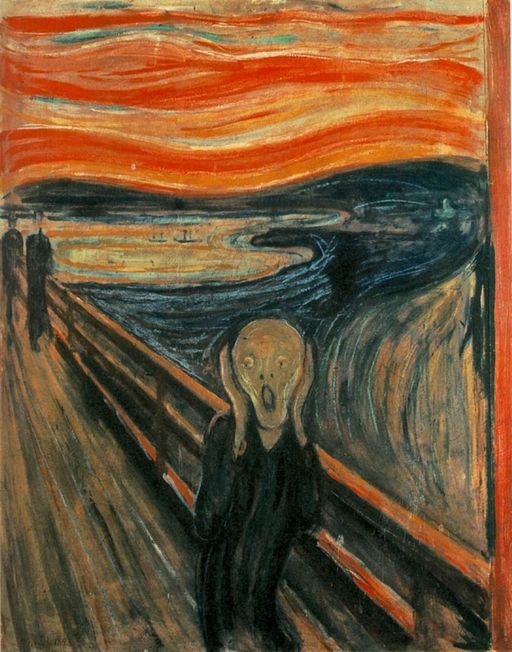 After the trip to A&E I went to see a GP that my brother (who is a mental health nurse) told me was good at dealing with stress related issues. He diagnosed me immediately. “These were classic panic attacks, brought on by hyperventilation, brought on by stress. You can’t get over a simple virus because you are too run down. You need to make some changes.”

Excellent. Whilst there can be no doubt that I was delighted to hear that I didn’t have a heart condition, pulmonary embolisms or some kind of persistent lung infection,  the news that it was something associated with stress and mental health was hard to hear. It wasn’t medicine that I needed, it was to make some lifestyle changes.

END_OF_DOCUMENT_TOKEN_TO_BE_REPLACED

I am sharing my experience because a lot of people suffer from physical manifestations of stress and anxiety and until it happened to me I didn’t think it was real. Now I know better.

I had been slightly breathless all morning but I didn’t have time to dwell on it. The mild respiratory virus that had been bothering me for a few weeks was refusing to shift but there wasn’t much I could do about that. Life sped on. I needed to file an article that I’d finished the night before; my 7yr old son needed to be ready for his football tournament which was starting at 9am (where were his socks – arrrggghhh); my 3yr old daughter needed getting ready for nursery (“I not going to nursery today,” she yelled) and I had planned to throw some food in the slow cooker before we left (it wasn’t going to happen).

But by the time we were on our way to the football, 20 minutes later than planned and struggling to find the ground, the breathlessness demanded my attention.  Every inhalation felt inadequate. There just wasn’t enough air getting into my lungs. My chest was tight and sore in a burning, itchy kind of way. I put my head back and inhaled harder. Only when my lungs were fully inflated did it feel OK. I did it again and again. But the dizziness and disorientation were getting worse. There were pains in my chest, high up near my left breast.  I opened the car window and the cold air flooded in. It felt better, a bit. “Mum it’s cold,” shouted a voice from the back. I ignored it.

I was so dizzy that I thought I was going to faint. I gripped my car seat and looked straight ahead hoping that I wouldn’t pass out. We were running late as it was. My son did not need to see his Mum fainting. My husband stoically kept driving. I don’t know what he was thinking.

A few minutes later we arrived at our destination. I couldn’t get out of the car because I couldn’t stand up on my own. I was too weak and I was shaking too much. “What the fuck was happening?” Surely a virus couldn’t cause a heart attack? Was I going to die? I didn’t know what to do. I used the car door to pull myself up. My husband took my arm and helped me out. My son ran ahead oblivious, excited about his match – I was glad that he hadn’t really noticed. We walked over to the pitch slowly and I leaned on my husband like I’d lost a leg. “Phone the doctor,” he said.

The duty GP at the surgery told me to go to the nearest A&E. “I had a chest X ray last week because of a respiratory virus and it was clear.” I said not wanting to waste anyone’s time. “Things can change in a week,” said the GP.  “It is not worth taking any risks.”

Luckily the grandparents had come to watch the football too, so we were able to get me to hospital without ruining the day for my son. By the time we walked into A&E it was all starting again. As I struggled to breathe, the dark patches in front of my eyes got bigger and I had to cling to the wall to stay upright. I was helped into a wheelchair and I wasn’t even embarrassed about it. I knew I couldn’t stand up. Then the shaking started. The only time I had ever had the shakes was when my body reacted badly to all the drugs I’d had when I was having my first baby. But it was happening again.

A nurse took me into the triage room and started to monitor me and ask questions. They did an ECG. My heart was galloping and I had an arrhythmia “But that can be normal,” she said gently.

They would take blood and monitor me for a couple of hours they said. I was put on a bed. I felt bad that I got a bed when there were some very frail and poorly people in that waiting area. “I am healthy. I am only 38. It was my birthday last week. I go running.” I said more to myself than anyone else. And to be honest I hadn’t run for weeks now.

Next to me a lady was crying as she sat in her wheelchair. Blood from her hand was slowly dripping onto the floor. The man next to me was vomiting sporadically into a bag, you could hear that his stomach was empty from the empty wretching sounds. A drip was attached to replenish him. The girl opposite looked like she had been beaten up, her face was swollen and she was crying. Two police officers sat with her, two more were by the doors. In the corner a man sat coughing, hacking up flem into a cup every ten minutes or so. The woman next to him yelled “for God’s sake” every time he did it and sat with her back turned to him in disgust. An elderly man nearby was yellow and quiet, he told the doctor that he had the runs. They told him that his kidneys were struggling, he was very poorly and he needed to be admitted.

There is no such thing as privacy in A&E.

“Hello Sweetie,” said a gentle voice, so kindly it brings a lump to my throat to remember it. “I’m going to put this cannula in so that we can take some blood,” she said. Her name was Maria and despite the full waiting room, the police, the hacking, the bleeding, the crying and the relentless pressure that she was undoubtedly under, Maria still cared enough to make eye contact with me and be kind.

After 4 hours of tests and waiting the results were normal. I was not having a heart attack, there was no fluid in my lungs. But the score for a protein related to blood clots (D Dimer) was on the high side so they decided to do a CT scan to check for pulmonary embolisms. That too was clear. There was nothing wrong with me. I wasn’t dying. I should go home. But what was going on?

“These were classic panic attacks, brought on by hyperventilation, brought on by stress,” said the GP that I visited a few days later to try and make sense of what had happened. “You can’t get over a simple virus because you are too run down. You need to make some changes.” he said*.

**I am sharing my experience because a lot of people suffer from physical manifestations of stress and anxiety and until it happened to me I didn’t think it was  real. Now I know better. 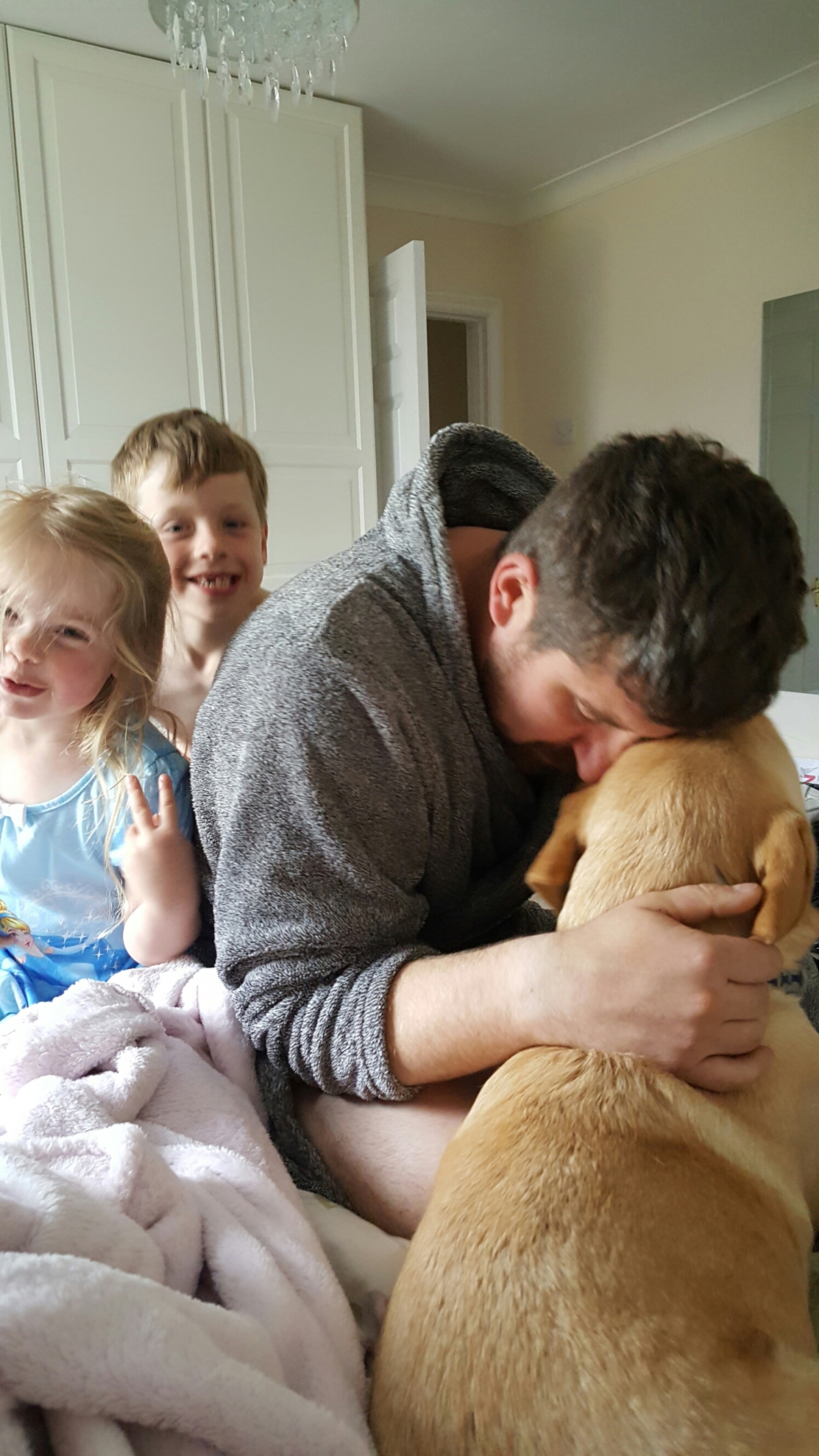 6:30am – husband’s alarm goes off and wakes me up despite the fact that neither of us are working today
6:35am – youngest starts singing/yelling “let it go, let it go….”
6:40 – “Mummy I got a bogie” yells 3yr old who has generally had a face full of snot since spring sprung (hayfever)
6:45 – Go and see 3yr old to wipe her nose. “Listen Mummy. I play my music but not loud,” she says having learned where the volume switch is on the keyboard that she starts pounding at.
6:50 – I climb into her bed hoping to lull her back for half an hour of snoozing. She ignores me and starts bashing a balloon against the wall. “Don’t let it go on floor Mummy”
7:00 – what the hell is that beeping? 7yr old’s digital watch alarm is beeping. And beeping. And beeping.
7:05 – I get up to try and find the sodding watch. 7yr old stays asleep.
7:15 – dog hears all the fun so jumps over baby gate that is supposed to keep him downstairs. He scuttles into my room and gets into my bed. In my spot, which is not even cold yet. Husband hugs dog tenderly, perhaps aware that wife will not be giving tender hugs this morning as she asked him to “turn that bloody alarm off so we don’t all wake up at dawn” yesterday.
7:30 –  7yr old is up. “Stop shouting Georgie I want to go back to sleep” he yells as he makes his way to the bathroom.
7:40 – I look at the dog in my bed. My husband snoozing. 3yr old laughing. 7yr old on the toilet. And I feel pretty lucky really.
7:45 – Coffee time. Except we have run out. Arrrrgggghhhh 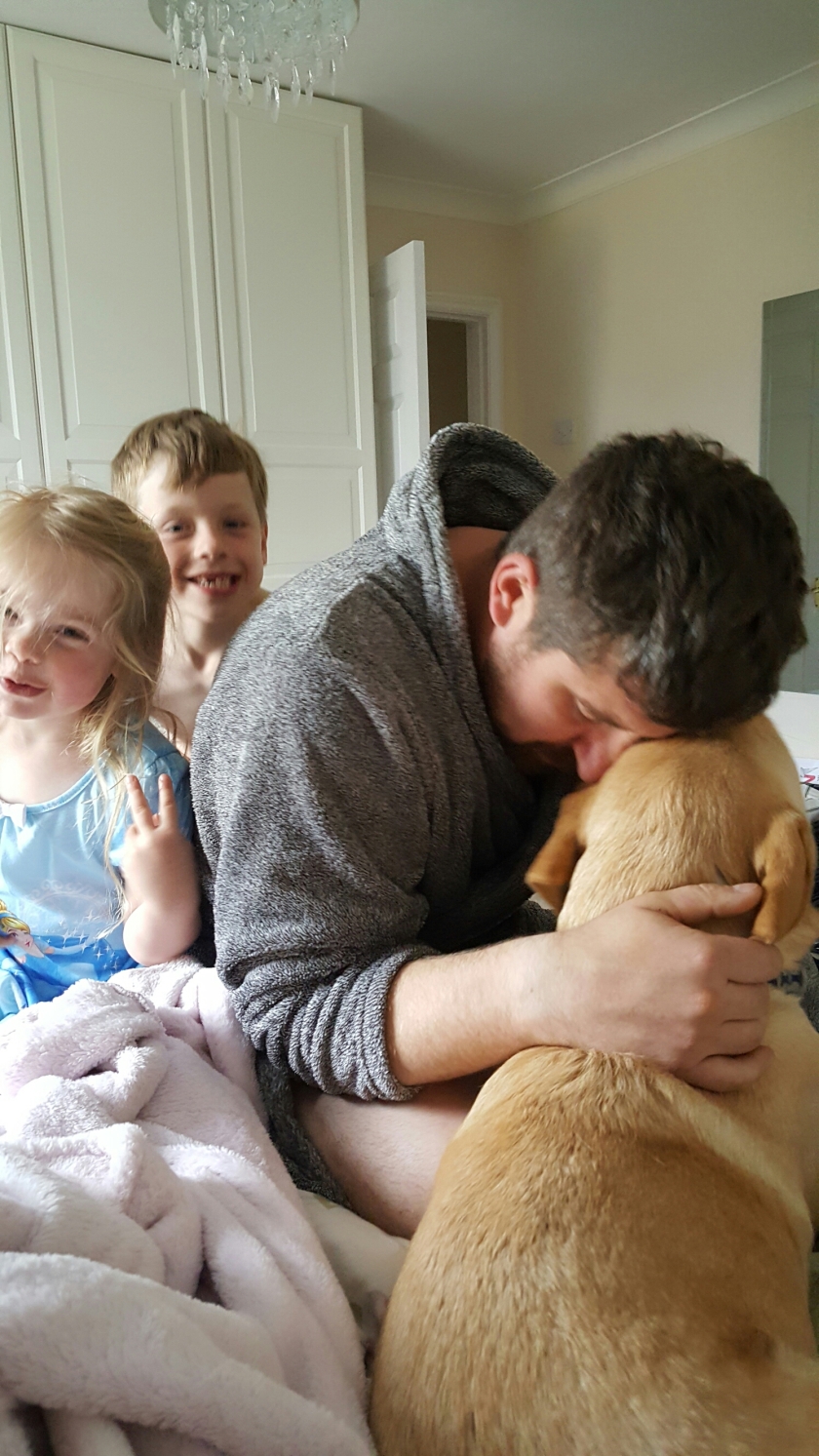