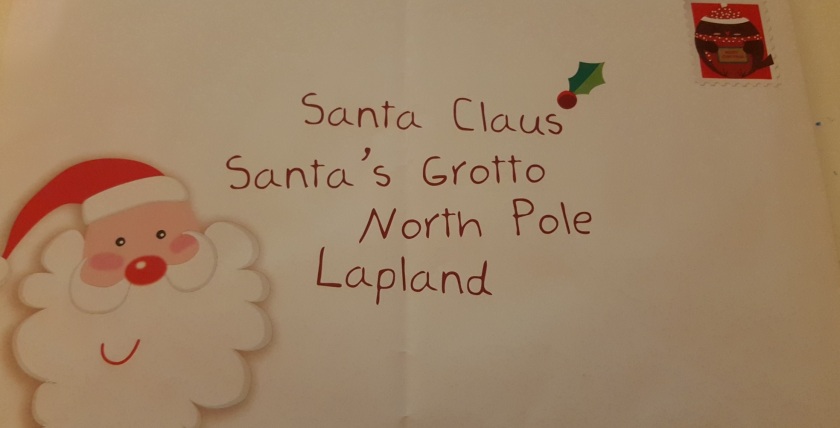 My 6 year old son’s Christmas list is less of a list and more of a challenge. Does anyone know where I might be able to find a rock from the moon? Seriously.

As for the rock from the moon he doesn’t think this is unrealistic. “Santa goes right past it” he said. Maybe I should tell him the truth.

That Santa doesn’t need to fly that high.

We were two independent, educated women who could add oil to the bloody engine all by ourselves. Except we couldn’t. Shit 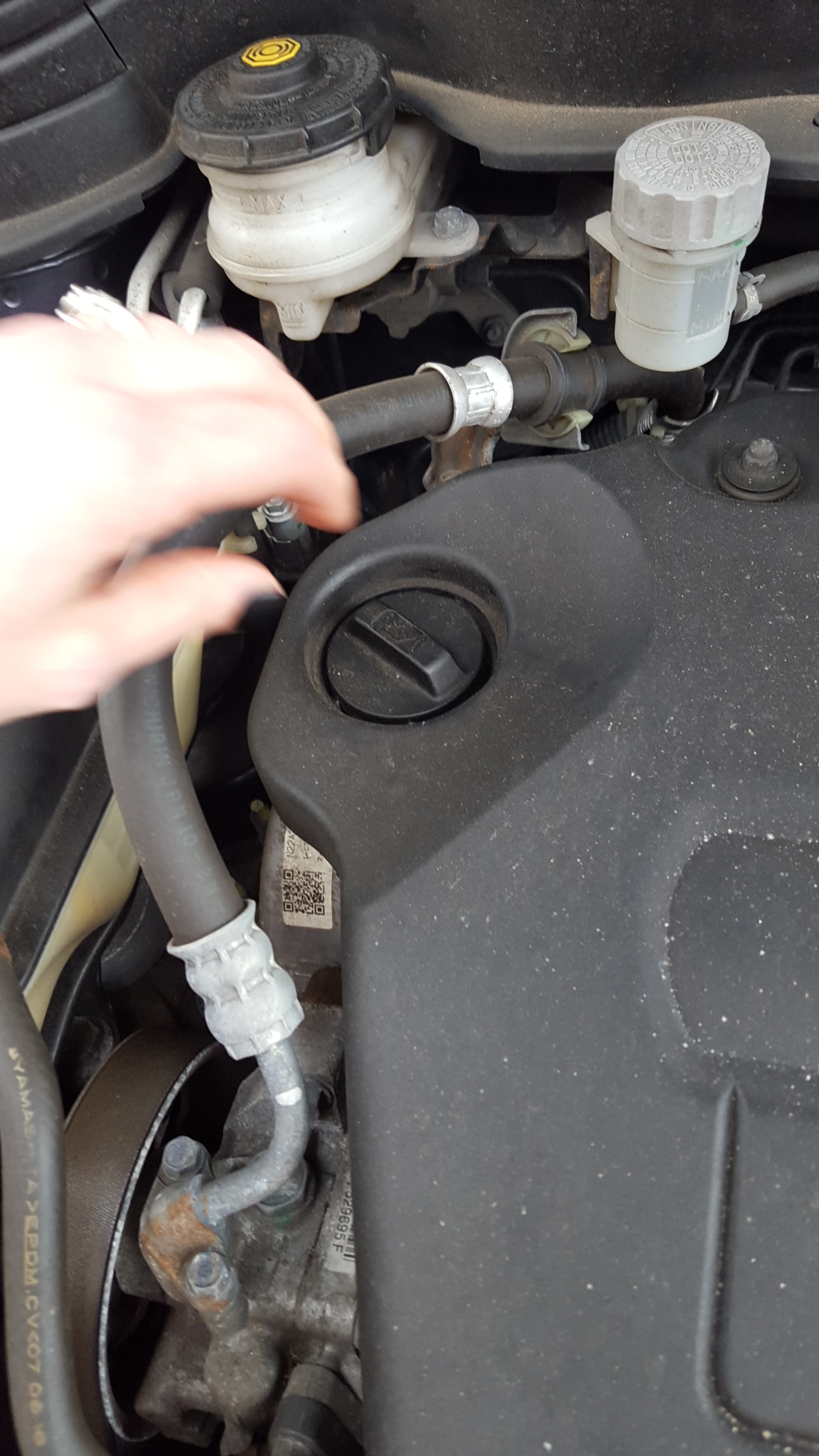 Last weekend I went away with the girls for a leisurely 2 days of relaxing, drinking wine, sleeping for over 8 hours a night, having naps and eating food that I had not had to cook. It was blissful. I was feeling liberated after flying solo for 2 days but on the drive home the oil light started to flash on the car dashboard. What does that mean? I discussed the implications of the light with my co-pilot Jo, and then rang the husband, he is a mechanic after all. And as he is so fond of saying to me (in your face Norm): “You don’t get a dog then bark yourself.”

His advice was simple: “If it is orange stop at the next garage and put oil in. If it is red pull over now and stop the car,” he said. It was orange.

At the next garage I bought a litre of engine oil (£14.99 – what? Probably the same price as the pick and mix) and then the fun started. Where the hell was the button that pops open the hood? This was already embarrassing. Not only did I not know how to check the oil after 18 years of driving I couldn’t even open the bonnet to start to get it wrong. We even asked a stranger who fortunately couldn’t find it either. Then Jo demonstrated a flash of genius. “Where is the manual?” she said. Oh yes. I’d had the car since December and had not yet looked at the manual which was in the glovebox.

The manual told us that the bonnet button was just behind the fuel button, which it was but tucked around the inside of the panel down by the accelerator. Not obvious. Obviously.

We popped it open. 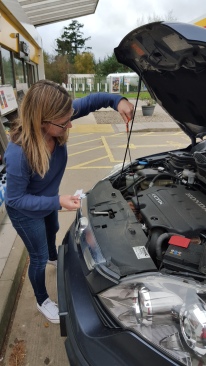 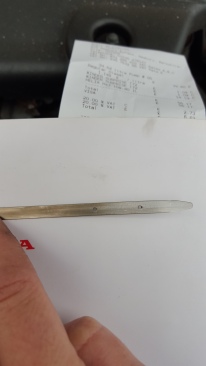 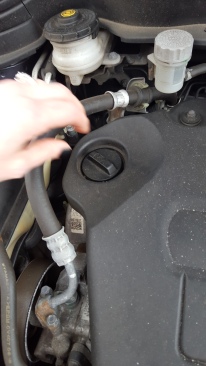 Next stop – the dipper, which we couldn’t miss because it was bright orange. We pulled it out and looked for the minimum and maximum lines. There were none. We looked harder. There were two tiny holes and the oil hadn’t even come up to the first one so it was definitely low. Excellent. This was not rocket science. Now which tank was the oil tank? “It usually has an oil lamp on it,” said Jo who, with her powers of practical deduction, was fast becoming my hero. To my mind there were three different openings that could have been the oil tank so I consulted the manual again. It was the black one, which once I wiped it clearly had an oil lamp in it. Bingo.

I tried to twist it. Nothing. Jo tried to twist it. Nothing. We alternated a few times and then looked at each other in dismay as the bloody thing refused to shift. We were on the final lap (of a very short race), we didn’t need a mechanic husband or anyone else for that matter, we were two independent, educated women who could add oil to the bloody engine all by ourselves. Except we couldn’t. Shit.

A few people had noticed our struggle most notably a bearded gentleman in overalls. We waved. He sauntered over and after a few seconds of explanation he reached down and immediately turned the cap which turned as easily as a  child’s windmill in a strong breeze. “It has been over tightened,”  he said kindly. Then he smiled, nodded and sauntered away as we thanked him, our politeness disguising the resentment that we had needed to ask in the first place. Fifteen minutes later we were back on the road feeling empowered. The car needs a service in January. Perhaps Norm would like me to do it instead……

There is something quite distasteful about arriving at a theme park and being told that you must pay £5 to park your car, despite the fact that an adult ticket cost £49 and a child admission is £45. It is like arriving at a nice restaurant and being told that you must hire a knife and fork. Even worse the cheery yellow lego man in his officious parking attendant uniform waving his grabby little claw hand demanding your fiver, is one of the first things that you see as you arrive. When you have been up since 6am getting three excited children ready, not had time for breakfast and spent 90 minutes singing Little Mix and Frozen songs to prevent your 3 year old having a meltdown during rush hour on the M40, the sight of that outstretched hand is enough to make you grab one of the sandwiches from your picnic and launch it at him.

However I had been promising to take my 6yr old for approximately two years and it was the highlight of his year – so I wasn’t going to let that grasping bastard ruin our day.

Arriving during half term in October meant that the park was busy, but we got there for opening time (10am) and moved through the (tired looking) entrance pretty quickly. Using the Kellogg’s Adults go free offer meant that we only had to pay for the three children and parking for two cars making the total cost to enter £145.00. The entrance is at the highest point so after walking in and past several shops (BIG shop, Star Wars shop and a clothes shop), you head down the hill and into the main park. The park and the rides are set out in several areas: Land of the Vikings (I had high hopes for this area – see Vikings TV show), Heartlake City, Pirate Shores, Miniland, Knights Kingdom, Lego City and so on.

Advice from experienced theme park aficionados is to head all the way across to the far side of the park immediately and go on rides that other people haven’t meandered over to yet. Like the Dragon rollercoaster which we didn’t go on because 3,5 and 6 year olds can’t queue for an hour. Of course we could have paid to queue jump by using the overly complicated QBot system which has three levels of pushing in available ranging from £20 to £75 per person. Yes – no need to get your reading glasses on. It does say £75. Who pays that? For our family of 6 this would have been £450. Equivalent to a whole month’s worth of chocolate for me (just kidding – I spend at least £1000pcm).

But heading to the end of the park to get started wasn’t possible for us because the kids wanted to go on everything that they walked past – including the many, many stalls and games that you have to pay for. Want three shots at getting this basketball through the irregular shaped hoop to win a massive minion? £5 please. Face painting like a fairy? £7 please. Burger? (£8.25 for a meal deal – take sandwiches). I spent a lot of time saying no to the kids – creating a sense of disappointment that was definitely not awesome. Thanks Legoland.

In the interests of balance and fairness I have to say that the kids loved the bits that we had already paid for. The adventure playground – also known as the Castaway Camp was a hit, along with the Atlantic submarine experience and the Vikings’ River Splash. They all did different driving experiences in Lego City and the 6 yr old loved the Jolly Roger pirate ship and even managed not to vomit on anyone #winning (he gets travel sick so the signs were not good).

*Reading this back I feel like a tight fisted miserable bitch. I am glad I took the kids. I just wish I didn’t feel so exploited. And one the bright side I now know all the words to “Black Magic”. Karaoke anyone?