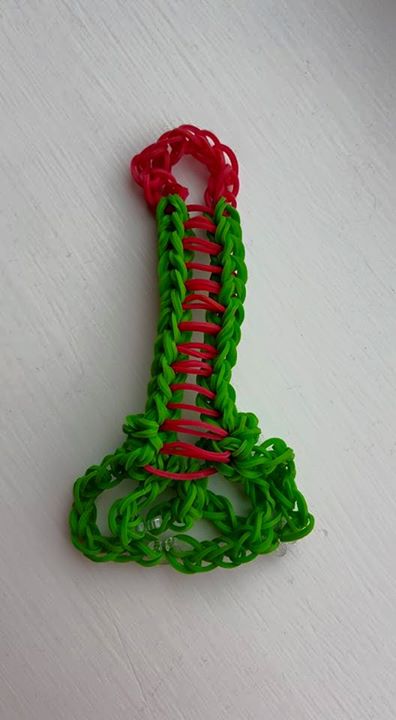 This isn’t what it looks like. Honestly. My 6 year old didn’t go on You Tube and download a video of “how to make a loom band penis” and then create this:

I know this because I have checked his tablet history. If someone had uploaded a clip on making extremely realistic loom band penises and this was available for children to watch then I had some complaining to do. But no. The coast was clear. He had obviously created this using his own imagination. Which is much worse.

Fortunately there is a simple explanation. You see he got pretty good at making things from loom bands after being in hospital having his tonsils out last year. We got him the loom kit to keep him occupied – and it did. These weird little elastic bands, the hook and the loom gave him something to concentrate on during that first 48 hours after the operation other than the sharp, unforgiving, raw agony of his cauterised throat. And so I am used to seeing him make bracelets, chains, key rings, webs and so on. This creation is:

Quite clearly a combination of a simple single loom bracelet with a  more complicated ladder loom bracelet attached to it with a finger ring extension to make a Superhero fighting bracelet. He wears this all the time and thinks it is super cool and runs around firing webs at people. Of course he doesn’t know that he has created a very realistic replica male penis – so no one tell him!

5 thoughts on “The Loom Band Penis”

Goodbye Messi, you were a superstar

The back seat strawberry monster

© Mum's Modulus and http://.mumsmodulus.com, 2016. Unauthorized use and/or duplication of this material without express and written permission from this site’s author and/or owner is strictly prohibited. Links may be used, provided that full and clear credit is given to Mum's Modulus and http://www.mumsmodulus.com with appropriate and specific direction to the original content.